Linear projects have their own particular challenges when it comes to erosion control. Centralized sediment basins are usually lacking. There is the need to protect existing inlets and catch basins along the roadways and the need to work around traffic, sometimes during peak hours and at night.
Although both linear and other types of site work require similar tasks to be performed, there are a few advantages to linear projects, notes Rob Lawrence, regional manager for Filtrexx International. 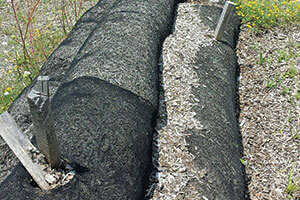 “Typically on linear highway projects, we have a flatter surface to travel on, allowing the installation to be more efficient,” he says. “Also, linear projects require less mobilization over the same period of time. On a highway, you may only mobilize once over a week or month, where on civil or industrial sites, you may have moved equipment around several times over the same time period.”

With linear highway projects, scheduling of crews can be easier as well, as locations are more predictable for where a crew should be at a particular period of time, points out Lawrence.

Building a Road
To attract more people to the area and boost the local economy, the Pennsylvania Department of Transportation is constructing a new highway. The four-lane, 11-mile highway runs from Somerset to Meyersdale, PA.

Joseph B. Fay Co., an i+iconUSA company, is working as a general contractor to provide earthwork services for PennDOT. The job requires an average of 150 daily workers, and the work is being done in coordination with 30 agencies representing government, utilities, and railroad sectors.

The project, which began in September 2013, encompasses mass excavation, the construction of the Pine Hill Bridge, and preparation work for five other bridges, as well as the demolition of two bridges over railroads.

In order to complete the work, Fay must move approximately 13 million cubic yards of earth, as much as 50,000 cubic yards in a single day. Drainage systems are being installed along the entire 11 miles.

Fay is partnering with the Pennsylvania Department of Environmental Protection and the Somerset County Conservation District to ensure environmental regulatory compliance.

The second phase of the job, which entails the grading of an additional mile of mainline highway, two local roadway relocations, and six new bridge structures, began in March and is expected to be completed in July 2017.

Fay is constructing five sets of dual bridges along the new alignment of SR 6219 between Somerset and Meyersdale. Additionally, the company is replacing a bridge on SR 2047 and is coordinating traffic restrictions during its replacement. All bridges are being constructed concurrently. The company is also performing local road alignment and reconstruction and installing the erosion and sediment control.

Filtrexx SiltSoxx are being used as the primary means of erosion and sediment protection for numerous wetlands, streams, and other sensitive areas near the project site. After many years of collaboration involving Weaver Express, Filtrexx International, PennDOT, and the Pennsylvania Department of Environmental Protection, SiltSoxx is an approved product and is now specified on almost every highway project in the state, says Lawrence.

Filtrexx SiltSoxx use composted green residuals inside a mesh containment system designed to remove sediment and pollutants through filtration and deposition. The product also is designed to be used to slow runoff flow velocities on sloped surfaces to reduce the transport of sediment and soluble pollutants.

Installation of the SiltSoxx is simple and quick, with relatively minimal ongoing maintenance. “When a significant amount of sediment builds up close to the sock, the sediment must be removed in order for the sock to work properly,” says Dan Bruener, project engineer. “Occasionally the sock will rip or tear and a new piece must be installed.”

The company is avoiding environmental disturbances that might affect nearby endangered species by limiting activities in certain areas at various times of the year.

“The SR 6219 project runs through 11 miles of farmland and forested areas that have many natural features that cannot be impacted due to the construction process,” says Bruener. “These features include tributaries, streams, and wetlands that provide a natural habitat for many types of wildlife. Of particular concern are several threatened or endangered species including rattlesnakes and longnose sucker fish, in addition to the more common species in the area. The FilterSoxx is utilized all over the project to control water flow and prevent sediment discharge into the local streams and wetlands.”

The biggest challenges on the project have been weather and access, says Lawrence.

“The project started in the fall and ran through the following year, so winter weather can be challenging,” he says.

Custom-built track machines were used to navigate frozen and muddy terrain year-round. Access on certain stretches of the project required extensive tracking back and forth to reload the machines with compost, adds Lawrence.