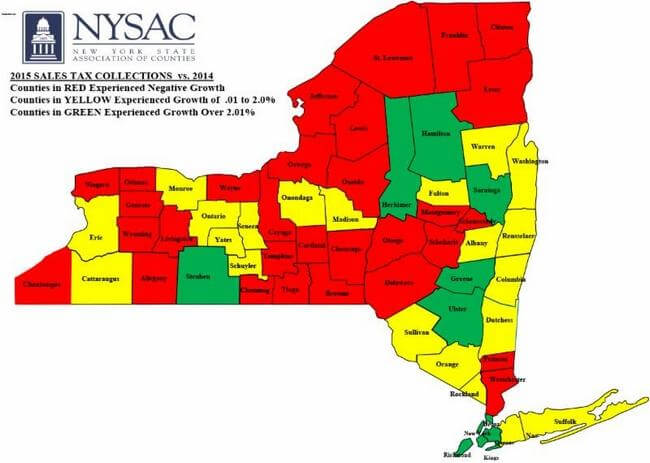 An analysis of the New York State Association of Counties concludes that the release of the 4th quarter sales tax data shows continued retail stagnation for most counties across the state, and calls the comparison to 2014 receipts “troubling.”

Legislative Chairman Timothy Dennis says as county officials look at all the final numbers for 2015, and because other areas of the budget look better, the sales tax decline won’t have as big an influence as it could. He explains, “The sales tax was remarkably close to the budgeted revenue. Those projections are based on previous year’s revenues and an estimate of the activity for the next year. When you take into account that we were down around $300,000 due to the decrease in the retail price of motor fuels, the rest of the activity showed a healthy increase. We are just now closing out the accounts for 2015 and will have a look at the effect on the fund balance. We had some other areas come out better than expected and I expect the fund balance will be OK.”

Historically, Yates County officials have projected sales tax receipts at a level that gave them some funds to set aside to help reduce the impact of spending increases on the next year’s local property tax levy.

In 2014, the county took in $625,943 more than had been expected. The budget projected revenue of $10.3 million and actual receipts were over $10.9 million. That money went into the general fund, and helped ensure that nearly $740,000 was available to help reduce the local property tax levy for 2015.

The 2016 Yates County budget includes a projection of $11 million in local sales tax revenue, and by the time work begins on the 2017 budget this fall, Treasurer/Budget Officer Nonie Flynn will have a more clear idea if the revenue stream is on target.

County officials could feel a squeeze if the sales tax revenues fall short of $11 million because of the recent use of fund balance to offset property tax levy increases — a strategy driven by Gov. Andrew Cuomo’s tax cap system.

Statewide, 29 counties saw declines in sales tax revenue in 2015, making the average change per county a reduction of 0.3 percent.

Steuben County realized an increase of 9.5 percent or almost $4.5 million, the largest growth in a county statewide. Yates, Ontario, Schuyler, Seneca, and Monroe experienced growth between .01 percent to 2 percent.

Flynn says that increase in Steuben County is a reflection of a change in how sales taxes are distributed to cities. In previous years, the citys of Corning and Hornell received 50 percent of the revenues collected within their boundaries directly from the state. Now, that amount is included in the county’s payment from the state. Discounting those funds, Steuben County’s revenues were actually flat, she says.

Schuyler County officials say their increase was likely due to ticket sales for the Phish concert held at Watkins Glen International last summer.

“This is most troubling because the fourth quarter includes holiday sales, which traditionally boost sales tax revenues across the board,” said New York State Association of Counties (NYSAC) President William Cherry, the Schoharie County Treasurer.

For all of 2015 compared to 2014, 30 counties experienced negative growth in sales tax receipts – with the average change per county down .3 percent. New York City, meanwhile, did quite well in both the 4th quarter (+17 percent) of 2015 and for the full year +7.3 percent.